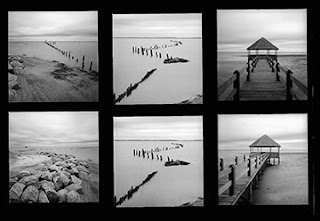 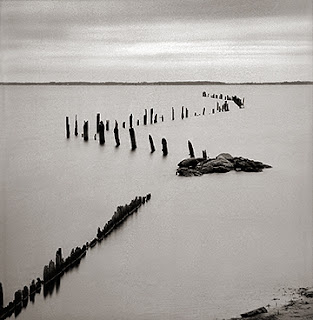 Ever get excited about going somewhere to photograph? You make plans and basically can't wait to start shooting ... well ...

At the beginning of the summer I began working on a new body of work.  For now it is titled "A Passage of Time." I am very fond of water and how it relates to the landscape ... being it ocean, river or lake. I have always been, for lack of a better word, a "water person." I love being in it, around it, seeing it and playing in it and on it. I can look at it for hours at a time and never be bored ... water is forever changing. I remember during my days as a photography student in Santa Barbara, California passing by the same water view daily. No matter if the sky was clear blue and I passed the same spot every day at the same time, the ocean always had a different look and aesthetic. I found the longer I stared at the ocean, the more it changed as time elapsed. What better medium than photography is there to be able to interpret and capture the passage of time of water and sky ... non that I can think of, but I am a photographer!

Many years ago I visited the Outer Banks of North Carolina ... all the way down to Cape Hatteras. It was fabulous ... sand dunes, wild untamed ocean and not many people. Perfect for image making. It had always stuck in my mind that some day I would like to return and spend more time photographing.

After a bit of planning, my wife and I headed south to The Outer Banks, aka, OBX. It was about a 6 hour drive from our home in D.C. We stayed at the Hampton Inn in Corolla, which is at the northern end of OBX. In hindsight, Corolla was a little too far north of Nags Head, Rodanthe and Cape Hatteras. Non the less, the accomadataions were quite nice. We had a mini suite with ocean view for about $119.00 per night including breakfast and warm cookies at the front desk in the evening.

Day one was a driving day. Consequently, we didn't arrive in Corolla until late afternoon, but did drive around a bit after checking into our hotel. It got dark early, so we grabbed a bite to eat and returned to our hotel room to plan the next day's excursion.

We were out and about early on the second day. While Corolla and neighboring Duck were beautiful, it was a bit too medicinal for my taste ... huge similar looking homes/McMansions with golf course type landscaping. Route 12 was the major north south highway. The further south we drove the more interesting things began to appear. My first stop to photograph was Avon pier, about 1/3rd of way between Corolla and Cape Hatteras. I was excited! Grabbed my camera and tripod and headed to the beach just under the pier. Here is where the fun begins. The wind was blowing about 35 MPH right off of the ocean and into my face ... sand was blowing everywhere. I wanted to make some long exposures ... yea, right! I extended the tripod legs and set the tripod down. The wind was so strong, it almost blew the tripod over ... and the camera was not even mounted. Well, there went that photo opportunity!
The rest of the day was no better. I had photographed in windy conditions before, but nothing like this. Consequently, we drove around the rest of the day taking note of places to return the following day, hoping the wind would subside.

The next day was no better, but another element came into being ... rain. Not just drizzle, but a downpour. To make things worse, the wind was still howling. What fun!

The following day was not much better except that the rain was more intermittent. Instead of heading south, we drove north towards the far northern end of Corolla and turned into the wild life refuge on Currituck Sound. It finally stopped raining, at least for the moment. Again, I grabbed my camera and tripod and headed for the water. Low and behold there was something worthwhile to photograph. As you can see from the above contact sheet, I only exposed 6 frames ... and one of them was a bracketed exposure. After my 6 exposure fiasco it began raining ... again! We headed back to the hotel. Talk about being disappointed!

Once back at the hotel, we logged on to accuweather.com. The news was not good. Heavy rain and wind for the next 3 days. It was time to pack it in and head home. Not even a full roll of film exposed ... bummer!

We arrived home the next day about 9:30 PM. The following day, after a bit of procrastination, I headed to the darkroom and fired up my trusty JoBo film processor. Being a film shooter, one never really knows what you have until the film is processed and contact printed. That's one of the things that I like about working in film as opposed to digital. For me, this is what keeps the mystery of photography alive and exciting.

You be the judge ... Luck or talent? Your comments are always welcome.

FYI ... check out BWGALLERIST. A really nice on-line magazine that caters to fine-art black and white photography. You will even see an interview of yours truly!
Posted by Craig J. Sterling at 12:15 PM