A long time ago I used to photograph people. I have always had a affinity for faces and personalities. Without bragging, I was actually a pretty good portrait photographer. Anyway, life took over and my body of European work and my images of Washington, D.C. landmarks began to take off. Consequently, I spent the past 20+ years continuing to build those bodies of images and basically put portraiture on the back burner ... until recently. 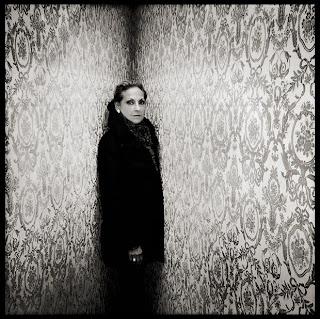 I made this image of my wife, Lesley while in Venice in November 2011. It reminded me of Irving Penn's "corner portraits" made in the late 1940's of writers and various celebrities. Technically, the only difference was the background ... well, actually the big difference was the photographer! Penn used 2 white studio-flats (as illustrated below by the portrait of Truman Capote) and my image used 2 walls at a 45 degree angle covered with flocking wall paper.

Penn's images are so distinctive ... so Penn. According to Mr. Penn, "the confinement seemed to comfort people, soothing them,” he once explained. “The walls were a surface to lean on or push against. For me the picture possibilities were interesting; limiting the subjects movements seemed to relieve me of part of the problem of holding onto them.”

To be perfectly honest, in some small way, I felt my image was a copy or rip-off of the "master." Everything in art it seems has been done before. I think most of us that are serious about our work will reinvent things we have either seen or have been influenced by at one time or another. I need to get over it!!!!!

Anyway, I made a nice print, but never got around to framing it and bringing it home. It sat on top of my flat-files in my studio. A lot of visitors to my studio would ask about the image.  In January, a couple from California asked if it was for sale because they wanted to purchase it for their collection ... really, OK. Since January, two other collectors have purchased this image ... go figure!

I have to say, taking the photograph of my wife was not an accident. I must have made 8-10 exposures. Using the corner, she did all the work ... and she loved the portrait ... me too. I must say, aside from selling several prints, the feedback I have received from strangers and  friends has been great. It has really renewed my long time interest in making portraits. Ummmm, might this be
a new direction?